In 2020, Zach Davies’ changeup was ranked #2/469 changeups based on run value.  In 2021 though, his changeup was dead last in the rankings at #590/590!  Many questions come to mind when you see such a drastic transformation like this.

Table 1 displays clearly that his changeup metrics were not the cause of the immense change because they are virtually the same as last year.

The argument that 2020 could have been a fluke with the shortened season is possible until you review his 2019 season.  In that year, his changeup was also elite, ranking 5th/579.

How effective a changeup is, depends on the main pitch it is being thrown off of.

Zach Davies’ sinker from 2020-2021 also remained essentially the same, keeping the difference between sinker and changeup nearly identical.  Interestingly, his sinker was league average in 2020, but in 2021 ranked 477th/478.

Given that his pitches had the same metrics, another crucial thing to check is where they were thrown.  This can play an important role in how effective the pitches are.

Looking at location, we see that his changeup location was consistently thrown between 2020-2021.  He threw about double the amount of pitches in 2021 due to the longer season, and you see about double in the main locations.

With such drastic differences in results and run value, we would assume his expected numbers from 2020-2021 were very different.

However, this was not the case. Based on the chart above, his expected batting average, expected slugging, and expected weighted on-base were all very similar to 2020, and even slightly better in 2021! His actual stats (highlighted in white) were far worse in 2021 nevertheless.

Another metric that can indicate the effectiveness of a pitch is Swstr% (swings and misses, divided by total pitches).  For his changeup, his Swstr% was the same both years, and whiff% on changeups slightly increased by .8% in 2021.  This shows the pitch’s effectiveness held relatively constant.

Davies’ BABIP (Batting Average on Balls in Play) changed drastically from .211 in 2020 to .310 in 2021.  Analysts have been debating how much skill goes into a pitcher’s BABIP, and how much of it is due to luck.  By knowing that his metrics and expected stats stayed relatively similar, we can isolate this change for him was due to luck.

For pitchers who have thrown at least 500 changeups in total over the last 3 years, the average BABIP is .275.  Over those 3 years, Davies’ BABIP was .257 which is a bit better than average.  His 2020 was far below average, which implies that he was a beneficiary of some luck. In 2021 his BABIP was above average meaning he was likely a victim of some unlucky breaks.

8. Did similar changeups from other pitchers have a big difference in outcome?

The most similar changeup to Zach Davies was Chris Paddack’s changeup.  Every metric besides MPH was virtually identical. 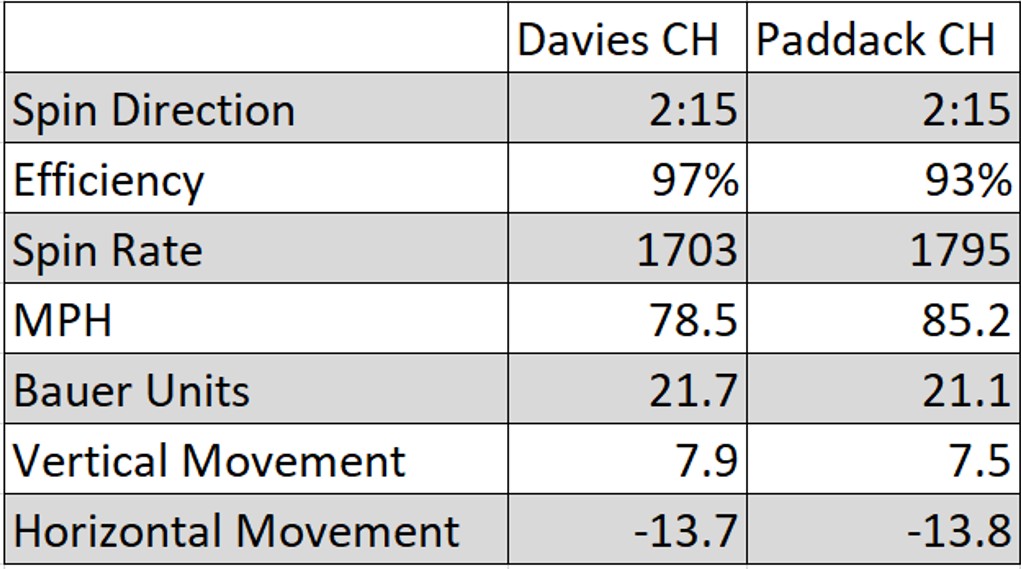 Paddack’s Changeup ranked 3rd/469 in 2020 (Davies ranked 2nd), and in 2021 Paddack was ranked 514th/590 (Davies ranked 590th). Remarkably, a pitch that is virtually the same as Davies’ changeup had the same drop-off in run value this past year. Could Davies and Paddack be victims of a change in approach that hitters around the league have taken?

9. How to value Davies’ changeup?

While Davies’ xwOBA did see a dropoff this past season, the wOBA against his changeup has remained very consistent over the last 3 years.

Looking at everything, I find it very bizarre that Zach Davies changeup went from 2nd best to dead last in one season. Luck definitely seems to have factored in to be part of the reason for this great difference between years, but it is highly unlikely to be the only factor. I was wondering if there may have been an error in how the run value was calculated on Baseball Savant, so I compared it with FanGraphs’ Pitch Value to make sure it was consistent.

After a quick comparison, both these sites tell the same story…Zach Davies’ changeup went from the best to worst changeup in one season! I come out of this article with even more questions like: Did the transition to Chicago affect him in a way that doesn’t show up in his pitch metrics? Could the league have adapted to have more success vs. his changeup and similar pitches in the last year? And finally, Was he tipping his pitches this past year? I would love to go deeper into this last possibility. However, due to the lockout, I am unable to look through MLB Film Room at each of his pitches. The tipping of his pitches would explain why both his sinker and changeup became among the worst-ranked pitches in baseball without having different metrics from the previous year.

Once this lockout is over, it will be interesting to see which team takes a chance on Zach Davies in free agency and if they choose to alter his changeup or if they stick with it.

I went into this article expecting to find some pivotal evidence that helped explain why Davies’ changeup had such a huge difference in Run Value this past year. Instead, I found numerous amounts of evidence that showed his changeup was virtually the same in 2021 as it was in 2020.

Each year it seems we learn more about different statistics and metrics to evaluate baseball players. This is a case where even with all this evaluation, there is no clear answer besides human factors. Factors like; him possibly tipping pitches, having a hard transition to a new team and division, hitters adapting to his pitch, and good old-fashion luck. I would love to hear from anyone who has other theories that can help explain this phenomenon.